Demand for hotel and data center projects boosted the commercial component of the momentum index by 4.3%. At the same time, modest growth in stores and office projects also helped that increase in the commercial sector, according to the report.

Meanwhile, the institutional component remained net-positive in November despite slower growth in education and healthcare projects. The institutional category jumped 2.7% in November, largely due to planning projects for government administrative buildings and religious facilities, according to the report.

The commercial and institutional components increased 28% and 21% from one year ago, respectively.

But the reduced rate of increase in the Dodge Momentum Index suggests slower planning activity in the next 12 months, said Martin. That falls in line with an Associated Builders and Contractors recent analysis of more sluggish nonresidential construction spending.

Dodge pegs commercial starts, such as retail, office, warehouse and hotel projects, to fall 13% in 2023 when adjusted for inflation, led by pullbacks in the warehouse and office sectors. Macroeconomic challenges, including technology sector slowdowns, will also likely cause overall investment in the office sector to slow further, according to a report from New York City-based commercial real estate advisory firm Newmark. 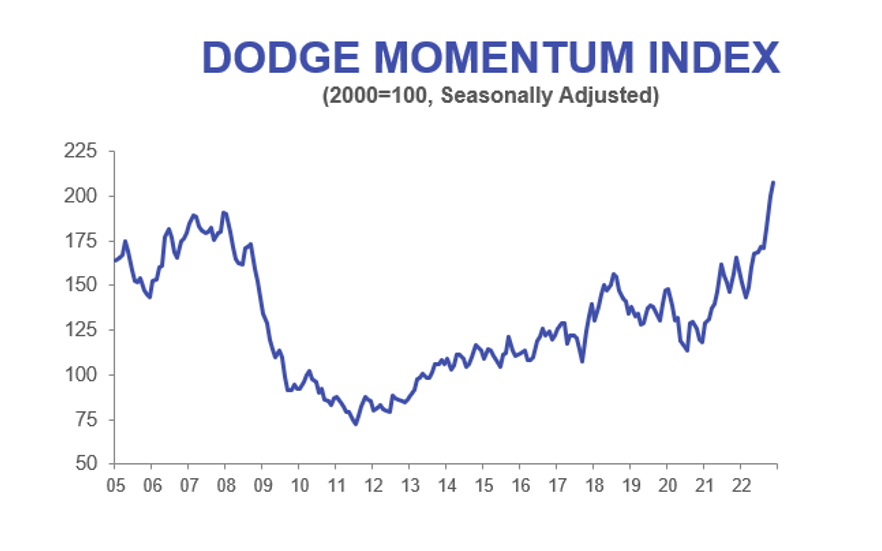 A total of 21 projects with a value of $100 million or more entered planning in November, according to the Dodge release. The leading commercial projects included two $500 million segments of a Facebook data center in Sandston, Virginia, and the $400 million Sunset Industrial Park warehouse in Sunset Park, New York.

The leading institutional projects were the $185 million Hollywood Casino relocation in Joliet, Illinois, and the $160 million Smith County courthouse in Tyler, Texas.