“Spending declined in a majority of nonresidential subsectors in October," Basu said. “The only bright spot [is] the 0.6% increase in publicly financed nonresidential construction spending. The infrastructure package and excess pandemic relief funds should allow the public sector to retain momentum even as the broader economy weakens.” 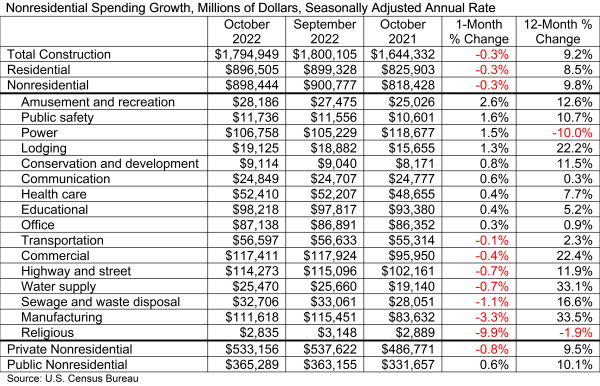 Commercial construction spending in October reached $117.4 billion, a drop of 0.4% from the previous month.

That sluggishness should continue in the next year, as a slow economic growth environment weighs heavily on the commercial sector, said Richard Branch, chief economist at Dodge, during a recent 2023 construction outlook webinar. Like Basu, Branch said then that public funding should support infrastructure activity in 2023.

Meanwhile, healthcare spending also continues to tick up. Spending in the sector in October reached $52.4 billion, an increase of 0.4% from the previous month, according to the ABC report.

Yet while overall nonresidential spending ticked down, backlog in October still remained 0.7 months higher than the previous year, according to ABC. 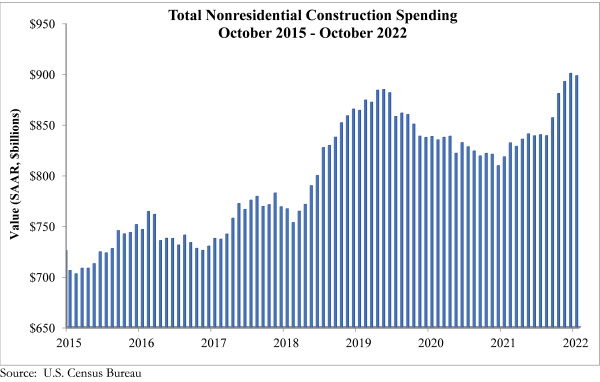 “While economists have spent much of 2022 watching interest rates march higher and fretting about recession, contractors have been working through their lofty backlog and improving America’s environment,” said Basu. “Despite the rising cost of capital, elevated materials prices and equipment shortages, contractors have generally remained upbeat despite a worsening outlook.”