“Specific nonresidential segments, such as data centers and life science laboratories, have thrived in 2022 and continue to support strength in planning activity,” said Martin. “As we move into next year, however, labor and supply shortages, high material costs and high interest rates will likely temper planning activity back to a moderate pace.”

The commercial and institutional components increased 29% and 25% from one year ago, respectively.

A total of 15 projects with a value of $100 million or more entered planning in October, according to the release.

The leading commercial projects included a $206 million expansion to the M Resort in Henderson, Nevada, and the second phase of the $180 million 1416 Dodge Office Towers in Omaha, Nebraska.

The leading institutional projects were the $500 million uCity Square Lab and Office Complex in Philadelphia and the $294 million life science research and development laboratory complex in San Carlos, California. 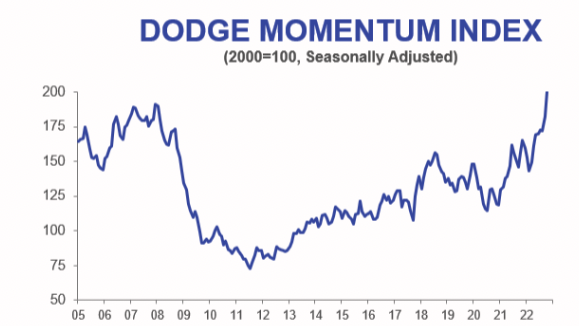