A primer on technology adoption in construction

Deciding how and when construction firms should adopt new technologies

Why Consider Technology Adoption in Construction?

The answer at the highest level is to increase competitiveness, profits, and safety. Underneath these metrics are of course improving construction costs, build quality, speed, design innovation, energy efficiency, scale and other measures that all impact overall competitiveness and profits. Safety plays a special role since in addition to impacting a firm’s profitability and competitiveness, there is a moral dimension as well.

Experience across many industries has provided compelling evidence that exploiting new technologies has proven a reliable way to increase competitiveness and profits. While this may answer the question of “whether” Construction firms should adopt new technology, it leaves open the question of “how” and “when”. In this article we outline the landscape of technology adoption to help gain an understanding of how and when construction firms should adopt new technologies and innovations. 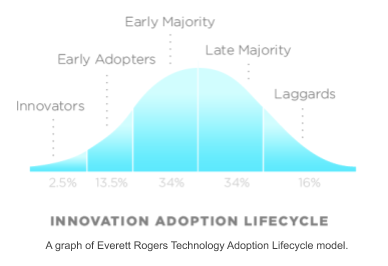 A modification of this early model was proposed by Geoffrey Moore in his seminal book Crossing the Chasm, where there is a “gap” between the early adopter and early majority groups, creating a challenge for technology adoption momentum to be maintained.

The diagram below shows how these groups and phases of adoption contribute to overall cumulative penetration of a new technology into an industry.

You can also view this adoption “timeline” through the lens of risk/reward. The earlier adopters enjoy the benefit that a particular technology adoption provides for a longer period than later adopters, but “discounted” by the risk associated with early adoption (higher costs, possibility it does not solve the problem, etc.)

As various waves of technology have transformed many industries over the past decades, we have accumulated substantial knowledge about the patterns that technology adoption takes within an industry and within an organization or group of users. These have been distilled into a number of different models that can help describe the nature of technology adoption.

The technology adoption “curve”, sometimes called innovation curve of innovation adoption lifecycle, was generalized by Everett Rogers from early models, in his 1962 book “Diffusion of Innovations”. In this model, technology adoption over time is described in a classic “bell curve” where each section of the curve is broken into categories of adopters with common traits.

Innovators/Technology Enthusiasts –are first to try a new “cool” technology. They understand it may not be perfect and are willing to take a risk that it may not solve their problem.

Early Majority/Pragmatists – These are more conscious technology consumers and are looking for useful solutions but also wary of possible fads or buggy solutions. They are pragmatic and rely on hard, proven data and facts. They look for a safe purchase.

Late Majority/Conservative – are more skeptical and price conscious about technology and innovation and are only comfortable in adoption once a product is “mainstream”. Like Early Majority they want to see hard data on effectiveness.

Laggards/Skeptics – are averse to innovation and new technologies. They require a clear provable advantage tied to clear metrics to be convinced.

Early adopters can be important to the development of a technology by providing feedback and ideas for improvement before it reaches the “mass market”.