Branch maintains a slowdown is to be expected, especially as the Federal Reserve continues to hike up interest rates. Still, he added the damage should be isolated to a few verticals and not as widespread as what the industry experienced during the period of 2007-2009.

“As some material prices head lower and more public dollars come into the market for infrastructure and manufacturing projects, the year is ending with a fair bit of momentum,” said Branch. “Next year will be a challenge, but nothing like what the sector faced during the Great Recession.” 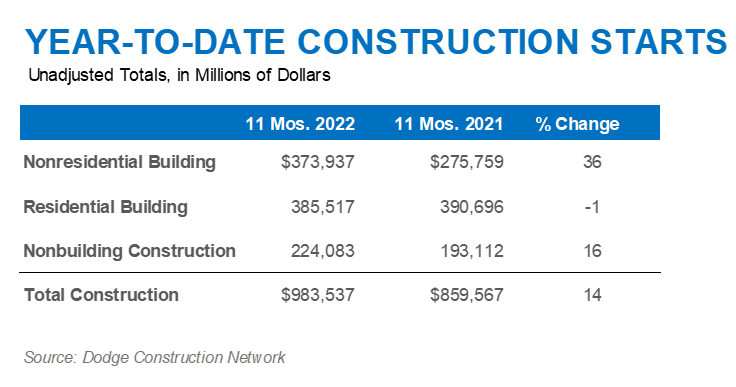 Highway and bridge starts fell 32% in November, while utility and gas plant starts ticked up 3%.

But both those categories should be shielded from any economic downturn in 2023, particularly because of public funding from the Infrastructure Investment and Jobs Act, said Branch.

The largest nonbuilding projects, which include roads, water infrastructure and power plants, to break ground in November include: 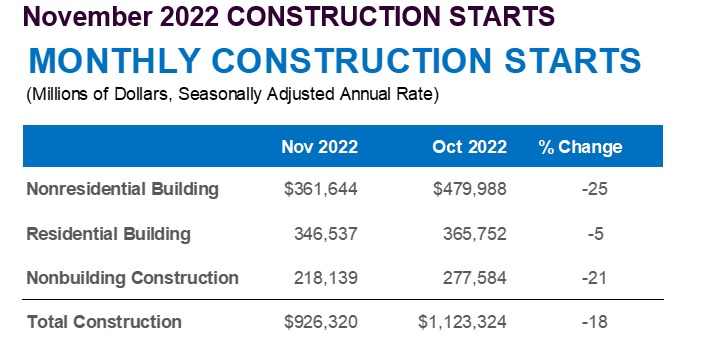 Commercial starts fell 33% in November, while institutional starts dropped 12%. But while economists expect certain categories in nonresidential to stall in 2023, Branch said to expect solid performance from data center, manufacturing and healthcare projects next year.

In fact, those types of projects are already showing positive activity. Here are the largest nonresidential projects, which include stores, offices, data centers, warehouses, hotels, education and healthcare, to break ground in November, according to Dodge:

Regionally, total construction starts in November fell in all five regions, according to the report.